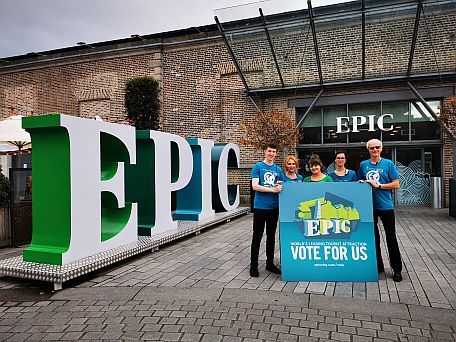 EPIC, the Irish Emigration Museum is the only Irish entry in the World Travel Awards and is in contention for the title of the World's Leading Tourist Attraction. Voting closes Sunday, October 20.

The Irish Anti-war Movement opposes the visit to Ireland by US President Donald Trump for many reasons but primarily because he is currently the world's top warmonger. The IAWM is calling on all Irish people who oppose war and racism to protest vigorously during his visit here. We call on those who wish to show their disdain with Trump to join the peace camp in Shannon Airport and the protests happening elsewhere this week including at the Spire in Dublin on Thursday evening, 6 June.

A group of seven US Veterans for Peace took part in a protest against the U.S. military use of Shannon Airport on Sunday 17 March.

World BEYOND War's fourth annual global conference on the abolition of war is to be held in Limerick over Saturday and Sunday, 5–6 October.