Greyhound workers, at a mass meeting on the picket line, have agreed to suspend their blockade currently under way at the Crag Avenue depot in Clondalkin after Greyhound director Michael Buckley agreed to meaningful direct negotiations with the workers.

Speaking this morning on hearing the news from the Greyhound picket line at Crag Avenue that Michael Buckely is loading staff members onto coaches in order to bring them down to the courts for a counter protest, People Before Profit councillor Tina MacVeigh said: "This is a display of utter contempt on Buckely's part for all of his workers, the striking workers in particular, but also the other 400 who he is now manipulating in a sick manouevre."

The public amenity forest at Gougane Barra, co Cork has been clear-felled for no good reason according to an internationally renowned Irish tree-scientist and a number of Irish NGOs.

A recent article in Ireland's IndyMedia network poses the question: did Michael Collins die by his own hand?

The Vice Chair of Fine Gael LGBT, Marcella Corcoran Kennedy, has expressed 'deep concern' about the implications of this week's Broadcasting Authority of Ireland (BAI) ruling, upholding a complaint against a Radio One discussion on same sex marriage. 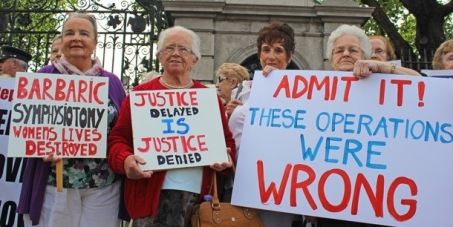 A woman who had her pelvis broken while awake during childbirth because doctors refused to perform a Caesarian and who still is unable to walk as a result has started a petition on Avaaz.org in an attempt to gain restitution for those who suffered similar maltreatment.